This is taking a little longer to produce than usual, but I thought I'd give folks a tease. I, in my tortured imagination, have always wondered what it would be like if the grotesquely misunderstood Jed Sawyer ever decided that he must use his chainsawing prowess for good. What would that look like in a normal setting, like say a construction site, or even medical school? 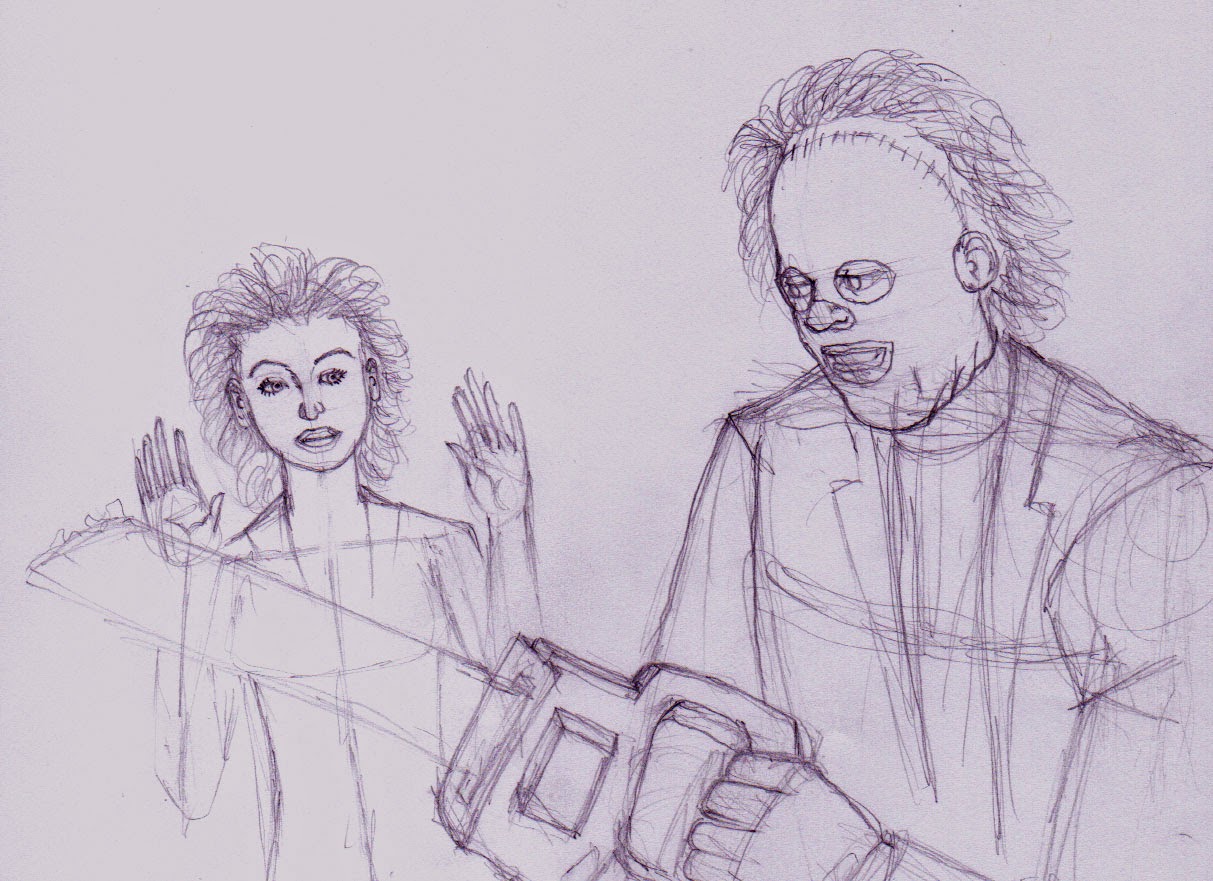 Now, bear in mind this is a work in progress. A couple of things need to be tinkered with (like the chainsaw). One might wonder why the woman here isn't more worried. Maybe she should at least look concerned. Or maybe she's dealt with people like Mr. Sawyer before. Maybe she's even had to work around other students (or employees) who chose to cover their faces with human skin.

There was that Myers kid once.

And let's not forget Voorhees. He was a handful.

I guess after a while, you sort of learn how to handle special cases with "special needs". You have to be very calm. Screaming like a banshee and running never ends well. These kinds like to chase. How can you hope to rehabilitate them when you run away, thus encouraging previous destructive behaviors?

So, while the treatment protocols vary, what people like these really need is normalcy. A daily structured routine. And boundaries. But they need to be treated like any other person to the extent possible. For example, calling Mr. Sawyer "Leatherface" is not recommended. Even if he wears his...leather face.

Anyway, when it's finished, you'll see it here.

Well, Someone Was Gonna Say It

Apparently this has been floating around the internet for at least a couple of years, but it's the first time I discovered it. Something on the sign of a church that may or may not even exist. A little research dug up an interesting place called "Church Sign Generator" on a site called says-it.com. You, or I, or anyone could go there, make a sign, make your statement and let your freak flag fly. And it would look like a sign you might see on a roadside encouraging people to come worship next Sunday morning.

This particular sign though gave me pause. You have to wonder who would take the time to create a message like this and why those people would think anyone would be welcome in their sanctuary. It's the kind of thing Westboro Baptist Church might come up with, but the truth is, there are plenty of churches who believe this or worse. 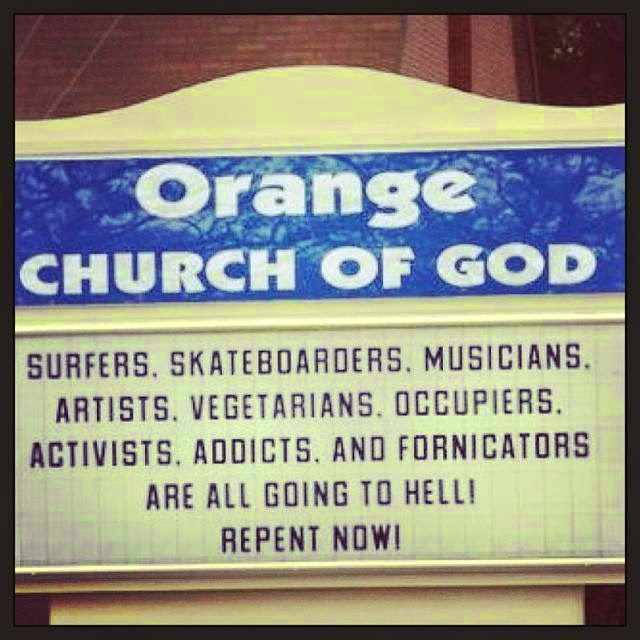 So someone really has an axe to grind whether the Orange Church of God exists or not. Look at the list. Skateboarders? Surfers?

Vegetarians, Occupiers, and Activists all going to hell?

Okay, the addicts and fornicators have been targets for some while now, but whoever wrote this has just widened the tent and created whole new categories of transgression for non-meat eaters, people who work for justice, and...creative people. Musicians and artists.

There's some history to this which we'll look into in future posts. But for now I'll leave you to scratch your head in wonder at the new categories of people "left behind" and who has the time to come up with such utter foolishness.

Art Does Things to Your Brain

This story comes from Hopkinsville, KY (that's KY for Kentucky, not "KY" for the...other stuff). A music therapist there had been working with children with often severe disabilities including one who seemed to be unable to speak or form words. Today, while engaged in regular therapy, the patient began to sing.

I cannot provide video since said patient and practitioner are bound by HIPPA laws and other consent regulations. When I heard about this, my jaw hit the floor and I said "OH MY GOD!!"
See, I look for this stuff. It's part of my ongoing mission to re-value art and art practice in this culture.

Being around art, living with art, music, dance, and so on does rewire and re-map the brain. The therapist in KY knows this. That's why she does what she does. It also allows her to connect with her inner James Taylor (or Gordon Lightfoot, or CSNY, or the Eagles, or Dan Fogelberg).

Now, just so you know, we're not entirely sure that playing Mozart to the little zygote you're carrying will turn him (or her) into a creative genius. That was a thing back in the not so distant day. But more evidence is beginning to show that art does something to the neural pathways in the brain. Sometimes the effects are dramatic as in the aforementioned case. This is the stuff of highlight reels. Most of the time, it's more subtle. It takes a while. But I offer this as more compelling testimony to those who still have the temerity to scoff. 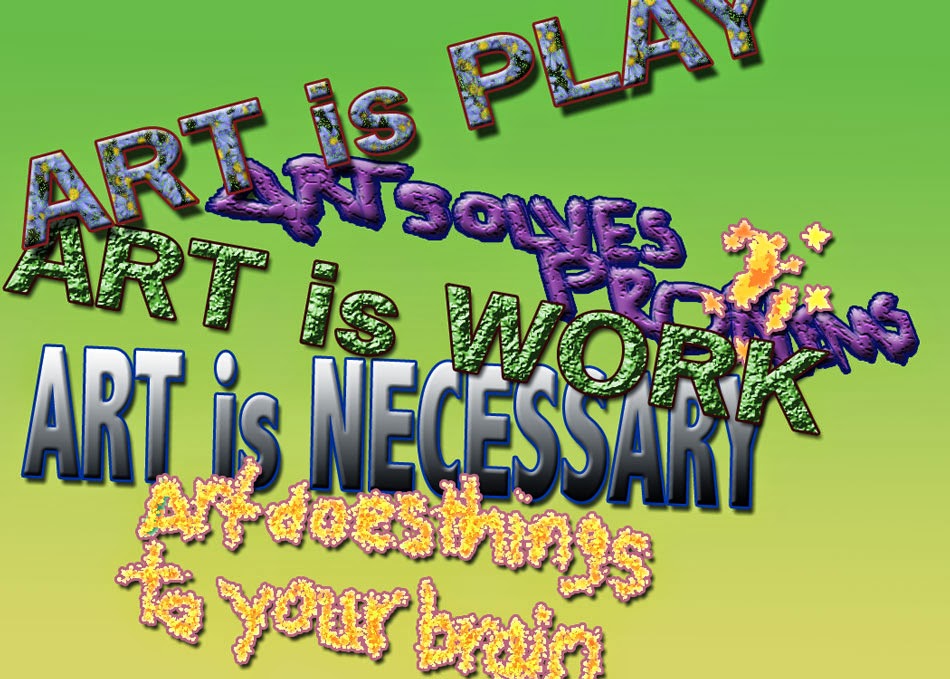 Have at thee, then!

Ever since I saw this picture (and heard that women were swooning over it despite knowing better), I have begun to wonder what it is about this culture that confers celebrity status on not really great people. The latest example is Jeremy Meeks, currently awaiting trial in Stockton, CA for a string of felony charges that include "street terrorism", whatever that means.

Apparently Meeks who's just 30, has a look that the camera loves. So even though he's facing serious jail time (and he's already spent considerable time in jail for other crimes), he could have a career in modeling lined up since a Hollywood agent signed him to a contract. "But wait", you say. "Hollywood doesn't do that, does it?" To which I say, "What country are you living in?" Our omnipresent media does in fact turn ordinary people into celebrities, if only for a moment. Usually it's harmless. Many times it's silly. But Jeremy Meeks is a criminal. A good-looking criminal, but a criminal, none the less. Remember when Dzhokhar Tsarnaev landed on the cover of Rolling Stone a year ago? Yes, good looking kid. BUT HE'S A TERRORIST.

Stop your swooning, folks!
These are not sane, stable, or nice people.

So this week's MALADJUSTED is about our very strange need to turn the kind of people you wouldn't even want over for coffee into people we look up to and admire and aspire to be. This would not happen in any other context, and once the spotlight's off, these folks go back to being the crumb de la crumb that they always were. 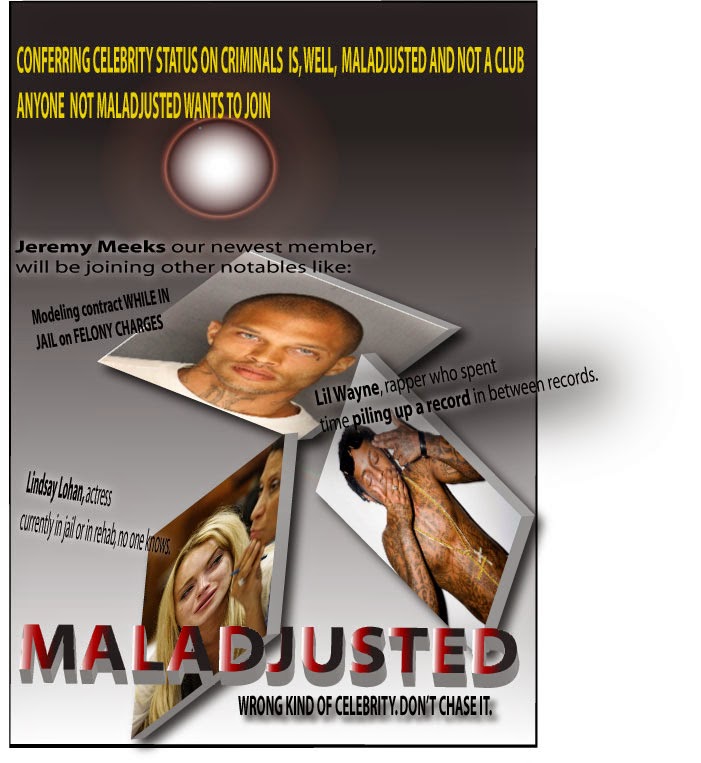 
Speaking of celebrity status for people who shouldn't have it, Jamie Dimon, CEO of JP Morgan Chase has throat cancer. Send him a card.
Wish him a speedy recovery.