For those of you whose time on this planet goes back to the 1960s, there was a time when money was referred to in slang terms as "bread". More recently, it's been referred to as "cake". Either way, today's installment of "Maladjusted" is appropriate in this day when income inequality is all over the headlines, thanks to the Occupy movement. 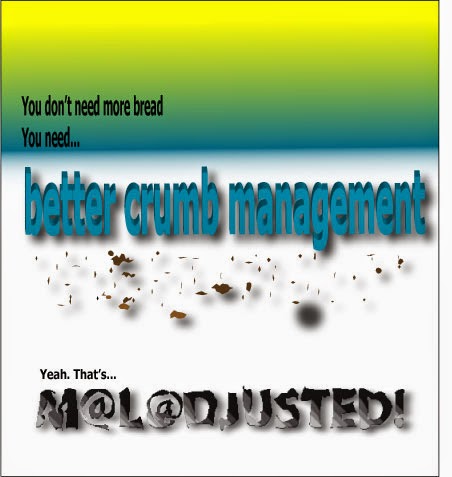 Chew on that a while.

Happy Heresy's Home: Want to "Thank" Me For My Service?

This came to me in the process of browsing this morning. An incredibly simple, direct and powerful piece of art relating to the ongoing practice of "rape and retaliate" in the US Armed Forces serving in our various hotspots around the world and very likely here stateside also. This is NOT, as the artist makes clear here, an isolated series of incidents or the acts of "a few bad apples." This is a pervasive, not uncommon, not even unusual state of affairs in the military and all branches do it. Moreover, the DOD (that's Department of Defense for the uninitiated) has known about this for decades and has done effectively NOTHING. Your tax dollars at work, my fellow citizens. No matter what you think of our efforts to "spread democracy" in these parts of the world, no matter what you think of the current Commander In Chief, this should not happen anywhere, to anybody. And with that, I invite you to click on the link below and listen to what "Jen" has to say.

Happy Heresy's Home: Want to "Thank" Me For My Service?
Posted by Ken at 5:53 AM No comments:

Back in April 2010, an oil rig called Deepwater Horizon suffered an explosion and a fire the results of which dumped millions of gallons of crude oil into the Gulf of Mexico. The spill went on for months. You could see a live feed of the ongoing spill on CNN. The owners of the platform tried various solutions, none of which worked, and people like Kevin Costner lobbied Congress to use a machine he'd had developed to help clean the water. Finally in July of that year, they got the thing capped and BP was put on the hook for the clean up and residual affects to the tune of $20 billion.

Around that time, a fifth grader named Olivia Bouler from Islip, NY had an idea. She would draw and paint pictures of warblers and pelicans and other North American birds and put them up online to raise donations. Since then, her renderings have been snatched up to the tune of $200,000 and counting to help with ongoing clean-up efforts in the Gulf, which contrary to some ads you've seen, is not finished. Despite the eagerness of some tourist-centered business interests to say that the Gulf Coast from FL to MS is "open for business", the truth is a little murkier than that. It will likely take billions to undo the damage wrought by one of the worst environmental disasters in US history, and to make whole the people who draw their livelihoods from the sea. So $200K may not seem like much, but the point is that artists can make an impact even on a catastrophe of this magnitude, as this girl has done. Further evidence of the effect of art on the culture and the power it has to raise consciousness. Just in case you were wondering.

Now, I leave you with this for the next Gulf Coast vacation you might be planning, and before anyone gets up in arms, I am NOT saying that you shouldn't vacation down there if you so desire. I'm just suggesting that if you feel a bit of anxiety about going down there, you're not alone.