For "Star Trek" fans (once and perhaps still called "Trekkers"), this will be a hoot. Somewhere in China near the sea (I don't think we could call it a lake), there is a building that upon first glance looks like a pretty cool, modern piece of architecture. But when you pull away and get aerial footage of it (as apparently the folks at Yahoo! News did from drones), the building looks for all the world like the U.S.S. Enterprise NCC 1701. Turns out, that's by design.

This building is the headquarters of a Chinese gaming and internet company called Net Dragon. According to Yahoo! Movies editor Kevin Polowy, the CEO of Net Dragon, Liu DiJian is a mad Trek fan (they say "mad" here in MA to denote orders of magnitude, unlike the common usage which just means...insane; or angry), and was willing to part with $160 MILLION (that's six zeroes after the 160) to build their new futuristic space based on the fictional starship. He also had to cut a deal with Paramount Pictures and CBS which co-own the licensing rights to all the "Star Trek" properties. Apparently no price was too small, and the result is what we have here.

As a fan, I tend to think the design borrows from nearly all the versions of the Enterprise, but more closely calls to mind the Enterprise "E" (below) from "First Contact", "Insurrection", and "Nemesis". At least the saucer section does.  The nacelles are more reminiscent of the Enterprise "D"(also below), the galaxy class ship from "ST:TNG" (that's "Star Trek: The Next Generation" for the non-Trekked), which was destroyed and the crew of which migrated to the "E".

All right. I've geeked out enough here. Artistically and architecturally, this is an amazing piece of design, engineering, and construction. I now turn you over to the visuals and the ambient soundtrack. 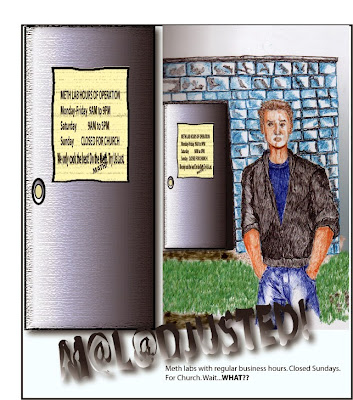 Visit www.theworkofart.net
Posted by Ken at 6:39 PM No comments:

Turning now to the local scene here in Worcester, MA, the Worcester Art Museum has been in the midst of an integration of exhibits of armory and weapons from the now-closed Higgins Armory, which for a long time had been the place to go for exhibits of that type. In fact, it had been the only museum of its kind dedicated to arms and armor for over 70 years. Sadly for the locals here, due to lack of funding, the Armory closed in 2013, and its 2,000 pieces were transferred to a newly built wing of the WAM which opened this year. The Armory building itself is a piece of history worth studying, but for our purposes, we'll hold that aside for now.

Beginning April 18th, the WAM opened an exhibit of pieces of Japanese arms, armor and weapons called "Samurai!" The pieces come from the old Higgins Armory collection, and the museum uses these as a jumping off point for showcasing modern interpretations of this ancient tradition in paintings, drawings, paper sculpture, and a variety of other media from Japanese and American artists. That exhibit runs through September 6th.

Last week, from May 5th through May 9th, artists Andrew Hem, Mari Inukai, and Audrey Kawasaki painted a gigantic Samurai themed mural in the Lancaster Lobby of the museum. Definitely worth seeing! And as if to take the Samurai legend and tradition further, May 17th is Star Wars Day. The event runs from 11am-5pm, and is free with Museum admission. Featured will be Jedi Knights and Imperial Stormtroopers as well as the Rebel Legion and 501st. Should be a fun time. The weather looks great for Sunday. If you're in town, come check it out. For those of you in Northern Worcester County, it's not a long ride, 40 minutes to an hour. Definitely worth the trip. See you there.

P.S. Here's a taste from the Lancaster Lobby. 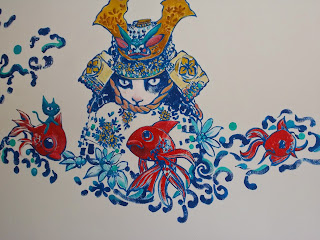 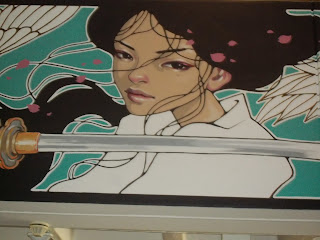 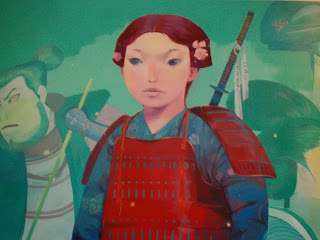