I cannot believe I just wrote the above title. He was here and now he is gone. At 12 PM PDT Monday, he was found dead in his home in Tiburon, CA, an apparent suicide. The possibility of a suicide is what makes this all the more ominous and sad. A man who made us all laugh for decades and displayed such unbelievable comic genius and immense range was also battling a darkness that finally got the better of him yesterday. That he had wrestled addictions into submission for 20 plus years is well documented. But early in the 2000s, he relapsed, and in 2006 sought treatment. I'd forgotten that he'd had heart surgery in 2009. Just this past spring, he ended his run on "The Crazy Ones" on TV. The show, despite Williams' usual schizophrenic riffing, never quite caught on and was cancelled. Another vehicle that could not contain his over the top style.

Somewhere around that time, I'd heard he was selling his mansion because he couldn't afford to keep it up or something. I think the asking price was $6.5 million. So if anyone has that burning a hole in his pocket...

I remember thinking, "Oh, are things getting bad for Robin Williams?" The depression aspect of his persona never really registered with me. In fact, it never even occurred to me that he was battling that. Or that depression is a far more powerful and elusive illness than I'd imagined. Earlier today I mused that I understood it. I may have been mistaken. Everyone has sad moments, everyone gets discouraged sometimes. What Robin battled was more than that. It never occurred to me that this was also fuel for his mad genius. I guess things were getting bad for him. Despite working almost incessantly, that siren song came calling again.

He'd checked into rehab as recently as last month. And then, just like that, on Monday, he was gone.


We were not ready for you to leave us. But leave us you did.
After the shock and the denial, we may be angry. Then we will truly feel the magnitude of the loss. And it may be quite some time before we accept that you're no longer with us.

In Between Doses of "Maladjusted"

This was shared with me by a good friend, although his version was about a minute shorter. It fits into the Maladjusted category of Stupid Human Tricks. Or, as I like to call it, "bescreweded-ness". And no, that's NOT A WORD. I made it up. Don't go looking for it.

I'm not adding anything to mention that this is by no means high art. It won't rewire your brain (but then, neither will hearing "Happy" 10 million times; of course I could be wrong.) or make your unborn zygote smarter. But you might find yourself laughing pretty hard.


Actually, "Happy" is a catchy little tune. Just not sure I want that particular neural pathway forged in my brain.

Visit www.theworkofart.net
Posted by Ken at 11:20 AM No comments:

For those of you waiting for the next step in this particular Maladjusted entry, it's called "Leatherface In Med School". In it we imagine what Jed Sawyer, a.k.a. Leatherface might do if he decided to turn his very particular set of skills to a noble purpose. We try to imagine what the reaction might be from his fellow students or the administration of the school that chose to take him on, that saw his unique and singular talent. Yes, I'm well aware that school exists exactly nowhere but in my tormented imagination. But who knows? According to legend, the previous President of the United States managed to get through 4 years at Yale University with a "C" average and then got into Harvard. The former Vice President dropped out of Yale. So stranger things have happened.

Anyway, for your edification, I present the progress notes below: 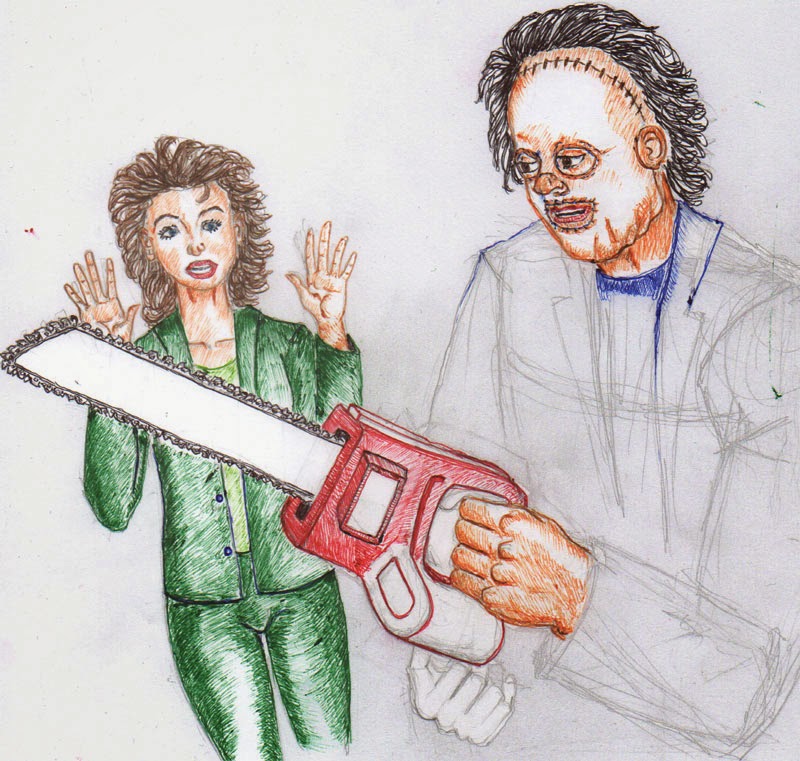 Now some of you might say, "Hey that doesn't look like any chain saw I ever saw." You would be correct. On the other hand, this whole scenario exists in a place we've never been to. So let's indulge that for a moment and suggest that this is a specially made chain saw designed to fit in a lab setting. See, you have to imagine how Mr. Sawyer sees this. Of course, not everyone will share his distinctive, albeit peculiar vision.

I'm betting the medical device industry might take exception, for one.