The "Iron Lady" Is Dead.

Margaret Thatcher is dead. For those of you who've been living somewhere other than the U.K. (that's the United Kingdom, not the University of Kentucky), which is a lot of us, Margaret Thatcher was the first and only female Prime Minister of Great Britain. Historic as that is, her legacy will be much more remembered for her 11-year attempt to return Britain to its former feudal state. Many say that she effectively destroyed the country and it has yet to fully recover. The British, it turns out, are a lot less reserved about her than we are across the ocean. And the most vociferous critics of the Iron Lady, it turns out, were artists. A lot of musicians in England had very much a pointed perspective. One song was famously called "Margaret On The Guillotine".  She was a force of nature that seemingly nothing could stop. Artists and musicians helped fuel the growing outrage with her until she was finally toppled in 1990. One noted singer, Morrissey penned a venom-filled op-ed in The Daily Beast following her passing, calling her "a terror without an atom of humanity." He also wrote "Margaret On The Guillotine" during Thatcher's heyday.

So...safe to assume Morrissey didn't think much of her.
I mean, you couldn't infer that when he asks "When will you die?"
Well, she's dead now. At 87. Of a stroke. She spent her final years in dementia, which seems fitting given the years she spent hating things like working people, feminists, the arts in particular, and poor people. All this hollows you out. I'll have to check this part out, but I heard that she died alone in a hotel room with only a caregiver in the room next door to attend to her. Curious how a woman of such heft and bombast could come to such a pitiable end. Her twin children were living abroad and apparently didn't visit often. Of course, the exact contours of their relationship are unknown, but it does make one speculate about the reasons why some grown children put states, continents, and even oceans worth of distance between their parents. The Iron Lady, she who wrecked England was now wrecked herself, and those closest to her seemed not to care very much.

Having said this, it seems that the Thatcher twins have made names for themselves, particularly the son, Mark, in ways their mother mightn't have approved of. And all of this is to note this: Thatcher was a force in and of herself. This is noteworthy. But she might have done well to realize what most superheroes get: I must only use this power for good.

More Later
KCD
Posted by Ken at 7:21 PM No comments:

While You Were Watching "Game of Thrones"

Last night the 2013 Major League Baseball season began quietly with a game between the twice-contending Texas Rangers and the non-contending American League new entrants, the Houston Astros. Destined for underdog status this year, and with the lowest payroll ($20 million) in the big leagues, the Astros gave playoff-tested Texas a run for its money, beating them 8-2, a sound whoopin' by any standard. Texas, of course will likely recover and avenge this embarrassment. Houston on the other hand gets to brag about having drawn first blood being clearly overmatched.

Today the season officially gets underway with the Boston Red Sox facing the decimated New York Yankees at Yankee Stadium (for the New England crowd), and my hometown New York Mets facing San Diego at CitiField. Meanwhile, over on the left coast, the San Francisco Giants defend their World Series title against perennial rivals the Los Angeles Dodgers.

The Texas/Houston matchup makes me think of Robb Stark, the King of the North, seeking to avenge his father's death and rescue his sisters from the Lannisters down in King's Landing. Anyone watching this match-up has to think that the Starks are doomed. But they have (or had) the Kingslayer under guard, and King Robb is not be underestimated. He has Lord Tywin's attention, which is no mean feat.
Rick Ankiel, whose 3-run HR put the game away for Houston, reminds me a bit of Jon Snow, Ned Stark's other son, who seems to be finding new life beyond the Wall with those who fight the White Walkers. 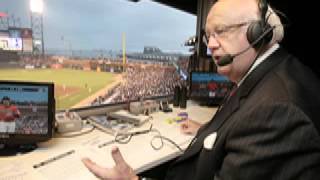 Jon Miller, the Voice of the San Francisco Giants 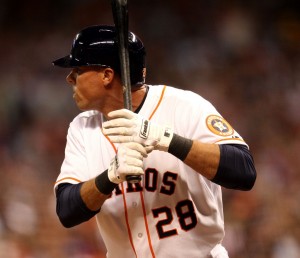 Rick Ankiel, reborn as the Hero in Houston's 8-2 victory over Texas last night. 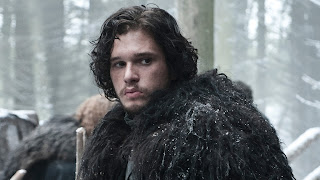 Jon Snow, son of Ned Stark, seeking to be a Hero north of the Wall 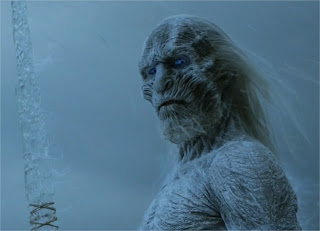 A White Walker, the object of Snow's hero-making quest. Yeah. Good luck with that!

And, finally the Kingslayer, Jaime Lannister looking not so good here, Lord Tywin, ruling as Hand of the King (which is to say, King, since Joffrey is a child, and a sociopathic coward), and none too happy about the current state of affairs as he faces a threat from the King of the North, Robb Stark. 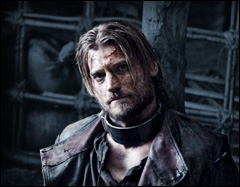 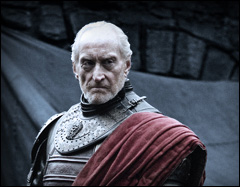 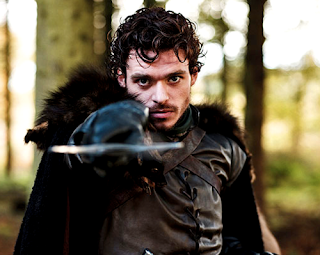 Game of Thrones, the game of Baseball, the metaphors abound. Let the games begin!