David Ortiz Is Not From This Planet

MLB Network is echoing the sentiment felt by many here in what we call "Red Sox Nation".

David Ortiz is not of this Earth.
He is a strange visitor from another planet. Or, he's a freak of science grown in a lab somewhere.

He must be. How on earth do you explain what he's been doing in the Boston Red Sox current turn in the World Series? Simple. Nothing on Earth can explain it. So he must be superhuman.

Let's examine the stats on this guy.
37 years old.
6'4" 250 lbs. They're saying he's slimmed down a bit, which makes him quicker.
MLB Career BA .287 431 HR 1429 RBI
He is currently hitting an astonishing .733 and has 11 hits in 15 at bats during this World Series run.
He's hitting everything they're throwing at him HARD. There seems to be no way to pitch him, no location that St. Louis pitchers can throw at where he cannot make contact. And make no mistake, friends: the Cardinals have some of the best, if not the best pitching in the league. If these boys can't take him out, he simply can't be stopped. In fact, it's fair to say that this is the one bat that scares the Cardinals. The Dustin Pedroias, Jacoby Ellsburys, and Shane Victorinos are annoying and troublesome enough. This guy is just freakish. He's in a zone unlike anything I've seen in recent memory. And he's not nearly done. With a 3-2 World Series lead, the Sox return home to Fenway for Game 6 on Wednesday, and they may just wrap it up then. This ought to be good.

UPDATE: The Red Sox defeated the Cardinals in convincing fashion 6-1, and wrapped up their 2nd World Series title since 2007.  This is also the first World Series that they've won on their home field since 1918, a stretch of 95 years.
CONGRATULATIONS, SOX!! WELL DONE!!

Now, who thinks David Ortiz should be in the Hall of Fame? Show of hands.

Feeling A Little Unhinged? Take This Gun and Call Me In The Morning

Do you ever have days when you don't feel...quite so mentally stable? Do you ever feel like the walls are talking to you and there are these weird people who want to fire microwave beams through your body and you just WISH you could MAKE THEM STOP??

Well friend, I have news for you. Right here in good old Unites States of America, a little mental illness won't stop you from getting a perfectly good working firearm to blast those weirdo bastards to hell along with their nefarious plans to harm you with microwaves. After all, we all know microwaves aren't good for your skin. Just ask any potato. And they really aren't good for your insides. Just ask that haddock from last night that you nuked for breakfast this morning. Insides a little steamy? Just imagine yours after microwaves have been applied. You'll feel a little roasted from within too, and that's plenty of reason that these people who keep talking through the walls about their evil plans should DIE IN A HAIL OF BULLETS!! And here in America, where the gun laws are so, shall we say, less than coherent, you can easily make that recurring nightmare go away. Of course, so might your medication, but WHEN HAVE MEDS EVER HELPED DURING A PSYCHOTIC BREAK?? Personally, I never take my meds during a psychotic break. I mean...isn't that the point of a psychotic break? A rest between meds? Isn't that potentially a GOOD thing?

So just march yourself on down to the gun store, pass the background check, such as it is, and give these crazy microwaving fiends what for. Just show 'em how no one's gonna bake you to a crackly crunch without a fight, by God. Trust me. A little bloodshed and mayhem goes a long, long way. You'll feel like an entirely new man in the morning. Just imagine how good it'll feel to have those annoying voices gone, and how good it'll feel not to have microwaves coursing through your cells.
Why, you may wonder why you hadn't thought of this sooner. Maybe it was those damned meds. This goes back to my earlier point about psychotic breaks. There's so much...clarity isn't there? It's so obvious what has to be done. Medications just...cloud things, obscure the real issues. That's why a psychotic break is helpful now and then. Clears the air. Just ask Wayne LaPierre, CEO of the NRA. He's been off his meds for some while now and he'll tell you that he's never been sharper. Ted Nugent says he stopped his medications and it was like a fog had been lifted. He saw the light. It was a muzzle flash. Both of them welcome their psychotic breaks when they happen, which these days is fairly often.

Now I'm just speculating here. See I have this idea that this was quite possibly the last bit of internal dialogue had by Aaron Alexis, the now-deceased Navy yard shooter who met his ignominious end on Sept.16th while he was shooting up the place down in DC. I'm thinking he must have heard voices or seen visions that assured him in somewhat the same way I've delineated above. I have no proof of this of course, but think about it. Why on earth would a gainfully employed Navy reservist feel the urge to go buy himself a weapon, go down to the Washington Navy Yard and blast the place, killing thirteen people? It's not what the lion's share of responsible gun owners do. Most responsible gun owners don't have a need to play "show and tell" with their weapons. They don't have urges like this. They're not waking up wondering "How many fools can I kill today?"


So what's my point? I don't really know. All of the sensible sounding solutions get shouted down by, it turns out, crazy people with guns.  People like the afore-mentioned LaPierre and Nugent who seem to think an armed society is a safer society. I suppose it makes a kind of sense, and I might at least understand the premise if there wasn't so much evidence pointing out the contrary. Seems like the only thing this armed utopia brings us is more dead people. As a prescription for armed violence, it makes about as much sense as trying to cure a cocaine addiction by rehabbing (that is a word!) in a crack house.
But that's just me.

By the way, a dear friend who happens to own a gun and concealed carry permit tells me that in TX, getting a license to carry a gun requires you to jump through hoops equal to the 12 trials of Hercules, after which you must submit a DNA sample.
She might have been exaggerating about that part.

Meanwhile I leave you to contemplate the effects of this: 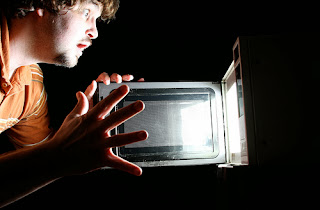 If after exposure to these rays you have strange thoughts in your head, or you can't shake that baked to a delicate crunch feeling, let me suggest seeing a specialist trained in these kinds of...maladies. Reaching for a gun will probably do more harm than good.