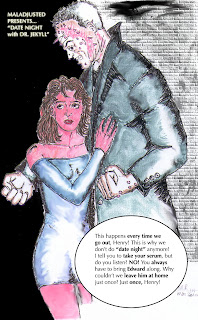 Sometimes I have the most twisted ideas that no one else imagines (or at least it seems so to me). This is one of them: a not quite ready for prime-time sketch about what poor Dr. Henry Jekyll's wife must have gone through trying to manage her husband's transformations into Mr. Edward Hyde. I thought, "Man. I bet date nights are really tough on these people. Especially if the good doctor doesn't take his meds." All dressed up for a night out, they sit down to dinner and suddenly, halfway through the appetizers, Henry's face takes on that look that she knows all too well. "Damn!", she thinks "He promised he wouldn't put me through this again!"
This being Mr. Hyde's rather annoying predilection for showing up uninvited. It's worn rather thin, and it's becoming a bit hard to ignore, especially in polite company.
Maybe all this explaining was unnecessary. Hopefully you get the idea. And if you didn't...then all this explaining was necessary. Anyway, enjoy!
More Later
KCD
Posted by Ken at 5:23 AM No comments:

James Franco and His "Invisible Art"

I may be coming a bit late to this, but I just had to say something about what I found to be a curious phenomenon. My sense is that nothing will come of it beyond what's already happened, and for that I'll be grateful.
Now, to the topic.

Actor James Franco who you may remember from the first set of "Spider-Man" movies has been into all kinds of creative stuff for a while. He appeared on a soap (that's "soap opera" for those of you who think "Keeping Up With The Kardashians" is edgy entertainment) not long ago before they all went the way of the dinosaurs. He's an author, a student, and apparently, a painter. I say "apparently" because it's not really clear what he paints. Last summer, he gained yet more attention because of his invisible art. Thanks to the folks at FOX News who have gotten rather good at unearthing these fine nuggets of celebrity culture strange and presenting them for a discerning audience, we have news of this odd little venture which includes a museum and actual sales of framed invisible art.

Now before we get ahead of ourselves here, let me mention that there is nothing on these canvases. Nada. Zip. Zilch. No color. No images. Not even a suggestion of an image, abstract or otherwise. If you ever wondered where modern art was going to go after the fame of folks like Jackson Pollock, or Willem de Kooning, this may be the outer edge. Minimalism taken to its logical (or not!) conclusion. Now you get to go to a museum and imagine what the art might be.

In other circles, this is called "visualization". According to the Kickstarter video, after this evening of visualizing and imaging what the art might be, you get a card in the mail that you can hang on the wall. And frame, I suppose. And, best of all, you get to pay. People have bought into this idea and the Museum of Non-Visible Art raised just over $16,000 through crowdfunding. Actual pieces have sold for up to $10,000. How about that?

Imaginary art.
Not to be confused with imaginary friends, which are cool when you're a kid, but when you're older it's called schizophrenia.
Or an episode of Supernatural.

Oh, that James Franco. What will he come up with next?

More Later
KCD
Posted by Ken at 1:36 PM No comments:

A Brief Contemplation of Tortured Artists

Demi Moore, famous for, among other things, her Vanity Fair cover shoot while she was "great with child", just checked out of rehab for dialing up her substance abuse following her break-up last November with Ashton Kutcher. Her publicist called her travails "exhaustion", which I suppose is somewhat correct. I remember thinking at the time that she was an example of the sort of "tortured artist" that some of us in this culture like to romanticize. And Hollywood has a way of glossing up the whole image so that the tragedy of their lives goes down easier, a bit like sugar before the bitter medicine. We shouldn't forget that at the center of the celebrity sheen is a human being that is not coping very well with something in her life, and this culture just happens to be shining a white-hot spotlight on it. She's going through a pretty painful divorce, after all.

Perhaps fortunately for the rest of us, our traumas don't play out quite so publicly.

The "tortured artist" has become a kind of archetype in our culture, something that people refer to when they think of artists. They're either irresponsible and crazy or they're irresponsible because they're crazy. The truth is, most of us aren't like that. Artistic types, actors, musicians, painters, visual artists, etc. deal with pain just like anyone else. Most of us don't resort to drinking Red Bull by the gallon or smoking synthetic marijuana. And for those of us that do cope that way, we're not inviting the glare of the klieg lights. After all, we wouldn't want people to think we're crazy now, would we?

In other tortured artist news:

Whitney Houston has died at the age of 48. She died the same weekend as my aunt, and 10 days after the suicide of Soul Train inventor Don Cornelius. Ms. Houston had appeared on Cornelius's show early in her career. Had he not been otherwise occupied with his own funeral, he might have attended hers and we would have heard that distinctive voice eulogizing her. Instead, we must settle for Kevin Costner, her co-star in "The Bodyguard" who actively campaigned for her to be in the movie. He did her proud, I must admit. But Whitney joins a list of so many talents taken down by addictions and the ravages of mind that drive them. And only heaven knows what demons drove Cornelius to shoot himself. Ignominious ends, both.

As it turns out, Houston was trying for a comeback, but her addictions were well known. Don Cornelius was contemplating what was next after Soul Train (like you could top that!), but he had become quite ill and he'd been recently divorced. Perhaps all this was inevitable in any case. I've heard it said that life is harder on those with creative souls than it might be on some others. Their souls are more sensitive, or so they say. I don't know how true that is, but I will say that some artists cope less well with the vagaries of life than most, and as long as that's true and there's a magnifying glass to exaggerate it, this "tortured artist" meme will stay with us. It's not at all something to aspire to. You do your best creating when you're healthy and sane. That's my story, as the song goes, and I'm sticking to it.